Rockin' In the Hall of Fame City: Part 2

To paraphrase an old Conway Twitty song, "Hello friends. Nice to see you. It's been a long time." This blog has been sadly neglected by yours truly due to a combination of real world responsibilities, laziness and a lack of new content. My apologies.

With that mea culpa out of the way, it's time to step into the WayBack Machine and revisit Canton, the onetime home of WQIO/1060, best known as "Q-10". When the station switched to a Top 40 format in late 1976, it came during a period of transition for the radio industry; The rise of music formats on FM was gradually siphoning off listeners from their AM counterparts. However, WQIO managed to rise above its longtime status as an also-ran in the market and limitations as a daytimer to mount a significant challenge its contemporaries in the ratings. In fact, Q-10 gained enough of a foothold in Canton that it arguably helped bring an end to Top 40 on its more-established rival WINW/1520. This success can be attributed to program director Ron Foster, who launched the new format after arriving from Youngstown's WFMJ/1390. In spite of the ratings turnaround, WQIO couldn't escape the problem of losing listeners to FM. By 1981, the writing was on the wall, and the station briefly switched to country before a sale brought a new owner and another programming philosophy.

In this brief aircheck from January 20, 1979, Steve Kelly presents the hits on a Saturday afternoon. Kelly later became a well-known personality on the now-former WJER/101.7 and 1450 in New Philadelphia and, for a time, WSNY/94.7 "Sunny 95" in Columbus. He currently is the program director and morning host on New Philly's WTUZ/99.9.

NEO Airchecks would like to thank longtime reader Bob Papa for providing this aircheck. Keep the contributions coming, folks!
Posted by neo_guy at 2:02 AM 1 comment:

We Interrupt This Broadcast...

It's probably not a stretch to say that November 22, 1963 began like most other days at WHBC/1480 in Canton. On-air staff, salesmen, management figures and other employees likely showed up for work in the morning like they had every day of their career and went about their business. It's also fair to say that they, along with Americans everywhere, couldn't have foreseen the day's events in Dallas, Texas that lead to the assassination of President John F. Kennedy.

Coverage of the unfortunate event interrupted WHBC's "B-Line" program, hosted by longtime personalities Bill Karrenbauer and Bob Krahling. In this unscoped aircheck made by Tom Emmons, Karrenbauer and Krahling are interviewing Hoover-Price Planetarium director Jeanne Emmons. Roughly 25 minutes into the recording, Karrenbauer interrupts the interview, leading in to a news bulletin from ABC Radio at about 1:42 p.m. Eastern Time. (Given the timeline of ABC's coverage, it appears that an earlier bulletin was not aired by WHBC.) After the update, there's a brief return to regular programming. One senses that the news disturbs Krahling, who nevertheless is professional in his brief assessment of the situation. The remaining 20 minutes of the aircheck is ABC's coverage, during which one hears an unconfirmed report that the president is dead.


Special thanks to WHBC chief engineer Dale Lamm and to Jason Stroll for making the aircheck available to NEO Airchecks.

The northeast Ohio radio community has had its fair share of personalities that have become mainstays of the dial. One of them is Jim Albright, currently the midday host at WHLO/640 in Akron. Prior to manipulating the airwaves at WHLO (and a brief stay as afternoon host at Canton's WHBC/1480), Albright was the host of the popular "Dial-A-Date" program on WNIR/100.1 in Kent. Between 1979 and 2000, he helped the region's lovelorn find happiness while fending off pranksters who were all too happy to sabotage his efforts. In this aircheck from 1996, Jim handles the latter with his usual sense of humor without allowing them to disrupt the show's momentum.

Our thanks to TheGrimm1970 for making this aircheck available.
Posted by neo_guy at 2:48 PM 2 comments:

For the blog's latest update, we focus on Cleveland's WGCL/98.5. In this aircheck from 1974, Truckin' Lenny and Skip O'Brien are heard presenting some of the day's hits. Based on the Cleveland Indians promotional announcement heard early on, the editor believes this broadcast occurred in late June.
For several years, WGCL was the market's chief competitor to rocker WMMS/100.7. WMMS ultimately won the ratings game for good in the 1980's, while WGCL switched to a retooled rock format and became WNCX in 1986.

Special thanks to TestChannelnumber1 for providing this aircheck.

Thanks to Tim Lones at Cleveland Classic Media, we now know that the WTAM aircheck is that of NBC's "Kraft Music Hall" hosted by Bing Crosby. Our own detective work determined that the broadcast was heard May 8, 1941, and featured Bob Burns, Connee Boswell, Alec Templeton, William Frawley and Walter Pidgeon.

The editor has also learned that the WFMJ-FM aircheck was recorded on the evening of December 16, 1947. The date seems to be at odds with the Wikipedia history of the frequency, but we'll take the disc's original owner at their word.

The original posting is below.

-----------------
Over the course of this blog's existence, the editor has come across many home recording discs featuring airchecks of radio stations. One of those was a recording of NBC Radio's coverage of the Japanese attack of Pearl Harbor in 1941, which the blog spotlighted last month. At the same time, much thought has been given to how we should present a group of miscellaneous recordings that have been collected over the past year and a half. The editor decided it would be best to provide some brief selections and leave it at that.

First up is a segment from what appears to be an NBC Red Network program heard on WTAM/1100 in Cleveland. The date of the broadcast is unknown at this time, but an educated guess would place it somewhere between 1943 and 1949. Stick around for the NBC chimes and local identification. Aside from jazz singer Connee Boswell, the other performers heard here are unknown. As always, any assistance in identifying the program is appreciated.

The second selection is a portion of "Melody Roundup", a popular afternoon music program heard on WHKK/640 (now WHLO) in Akron during the late 1940's and well into the 1950's. The program was hosted by Cliff Rodgers, who also hosted a morning show on WHKK during this time period. It's not clear if it's his voice heard during the closing. Based on the music, this broadcast is from roughly 1950.

The final segment is long on music and short on spoken word content, but interesting for one reason: It's an aircheck of an early FM broadcast, as heard over Youngstown's WFMJ/105.1. Dating from about 1950, it's the earliest FM aircheck in the blog's collection. This is undoubtedly a rare recording, since WFMJ-FM's license was cancelled a few years later. A brief history of the frequency in Youngstown can be found here.


As we prepare to say farewell to another year, NEO Airchecks ushers in 2013 in its usual fashion. This time, the blog features an aircheck of Youngstown's WHOT/1330 from January 1, 1973. Longtime Youngstown radio personality Boot Bells is heard counting down the top hits of '72. Special thanks to regular contributor Jerry Coleman for submitting this recording for the blog's use.

Be sure to check back with NEO Airchecks in 2013. Some long-awaited features are being prepared for your listening pleasure. Happy New Year!
Posted by neo_guy at 4:55 AM 2 comments: 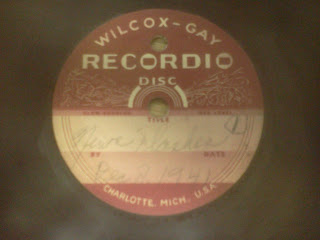 With Americans observing this week's anniversary of the Japanese attack on Pearl Harbor, it's appropriate to feature some airchecks made in the wake of the incident that launched the United States into World War II. The first segment is a partial recording of an NBC news roundup of the events of December 8, 1941, 71 years ago today. An unidentified announcer summarizes the Japanese attack on Manila, President Franklin Roosevelt's address to Congress and the subsequent vote to declare war on Japan. This broadcast, which was captured on a Wilcox-Gay home recording disc and eventually discovered by the editor, appears to have been made in the late afternoon or early evening of December 8th. While it's not clear which NBC affiliate was recorded here, this program was undoubtedly heard in northeast Ohio. WTAM in Cleveland was an affiliate of NBC's Red Network, while WAKR in Akron and WFMJ in Youngstown were affiliates of the Blue Network.

The second aircheck was found on the flip side of the same disc. A different announcer on an unnamed network provides a similar account of December 8th. Any assistance with identifying either announcer or pinning down the time of broadcast would be greatly appreciated by the editor.